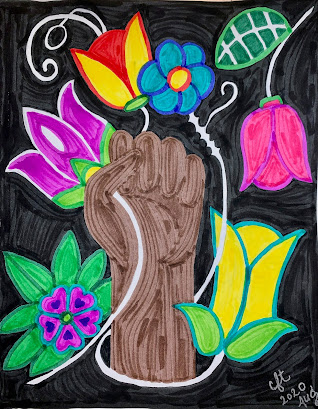 Sketch by Claudia A. Fox Tree
Thanks for asking about anti-racist books related to Native Americans. Unlike other oppressed peoples, many books about Indigenous people are not written by Indigenous people. In addition, many professors in "Indigenous" study departments at colleges and universities, those who write academic books, are also not Indigenous. Can you even imagine a Black studies department without a Black professor? Or Jewish studies without a Semitic professor? By Indigenous, I mean, Native American, American Indian, and First Nations of North and South America (though I prefer talking about specific people and their specific tribal nations). I will say that I am more familiar with North American resources. I have picked important topics instead of specific nation stories (though some of those are in the mix, too). There are many, many more books, if/when you want to learn about a specific tribal group.


Indigenous people who write tend to tell stories and don't always "spell it out," so the reader has to do some work, which is made more difficult because most people have very little understanding of Indigenous history and culture, so EVERYTHING seems to be new learning, and that’s a lot to process. To understand “storytelling,” I recommend reading Thomas King or Lori Alvord.


There is no "perfect resource" - not a book, person, documentary, nothing. You have to have many experiences and resources in order to understand nuances and specifics about anything, but when you go from no knowledge to some knowledge to really wanting to educate yourself, I feel it is important to remind people that this is WORK! You will need to unlearn and dismantle most of what you "learned" and think you know about this country's history and its original people. Plus, books are not written as anti-racist this and anti-racist that. You need to understand history, in order to understand culture, and so that you can even somewhat interpret what is happening now. Period. Sometimes, you'll learn about one or three specific tribal nations, and sometimes it will be general (many nations) across "Indian Country."


Indigenous People will sometimes write/ understand the same things differently. This is obvious in the "real world," however, when there is so little accurate information out there, it is more challenging because most people are only reading/ viewing one or two voices/ resources about Indigenous people. Just remember the Indigenous people are speaking from their own research and experiences. Even this list is informed by the questions I am asked, the places I've traveled and lived, and feedback from others who read the books I recommend.


Here's some places to start with categories I think are important, moving from my "read first" suggestion down within each category. I have read/ viewed/ listened to all these, so it is a "curated list" of my favorites, resources that informed my own thinking, and those by Indigenous authors. Of course there are many more resources, but as you can imagine, it is hard to get emotional energy to dig into a new book when much of the history is so traumatizing and triggering for me. (I also have a do not read list which includes 1493 by Charles C. Mann and Gun, Germs, Steel by Jared Diamond - which are my litmus test for racism - "if you recommend then, then you haven't done enough work").

Also, I didn't include specific resources on identity, though it is embedded throughout. That's "next level work." However, I want to remind folks that many Indigenous stories are mixed with other racial/ oppressed groups: Black (New England, Southeast, Caribbean); Asian (West Coast, Hawaii); Latinx (Southwest, South America); and more. After all, we have been intermarrying and creating community together for 500 years.


THE FOLLOWING ARE NOT RANKED, THOUGH I DID IDENTIFY **


Music/ Songs: a mix of songs in indigenous tongue, English, and vocables (the importance of Indigenous languages):

For Educators: These are books more directed at people who are teaching and looking for curriculum

Allies to First Nations can do the following: